We came on a weekend when the Park was sponsoring a Civil War Reenactment  with cannon and artillery fire. Vendors with food, arts, relics, and chili cook off. Then  a big display with all cannons firing at night. Woo Hoo.  Poor Inky ran away and 6 of us roamed the docks for an hour calling  until he appeared.

We motored round the corner to Fat Daddy’s  for dinner with Barb and Nick Headly…and Ziggy. They are moored beside us with their 288 Bayliner! Skinny water coming in…2.5 feet, but we raised the motor and plowed in. 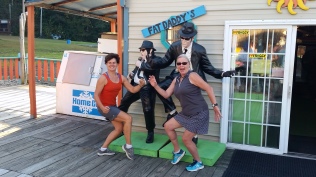 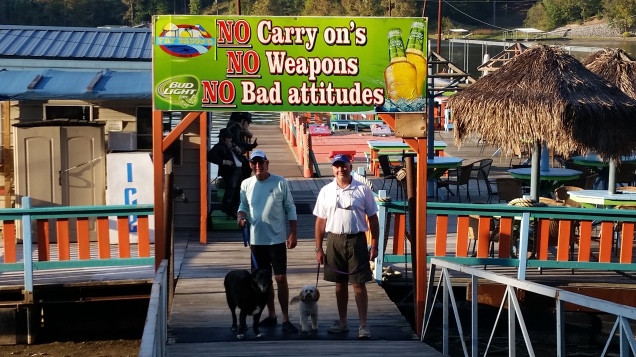 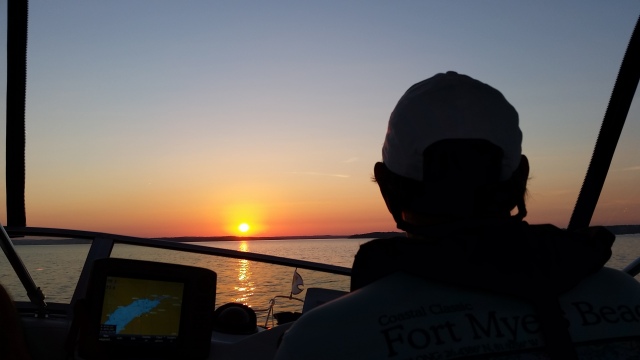 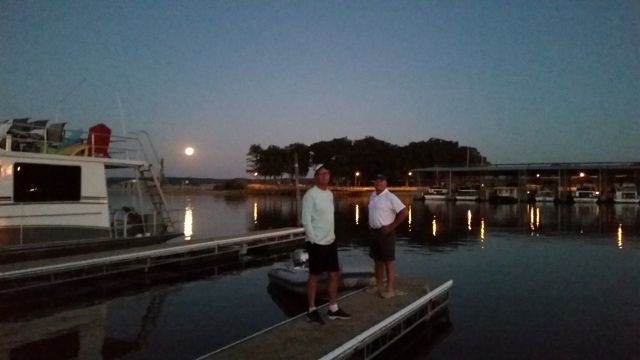 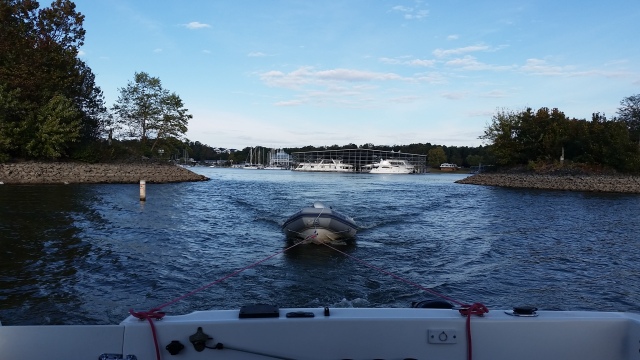 Shoved off at 8:30 this morning headed south running upstream on the Tennessee River in a stiff 15 mile per hour headwind. About 90 minutes in we gave up and returned to GTB. 4-foot swales coming over the bow made us slow to a crawl and would put us at Paris Landing (40 miles)  later  than we wanted. It wasn’t dangerous, just exhausting. Don loved it. I was’t afraid, but I didn’t want to be falling down every step for 8 hours.

We have been in Kentucky for a month. Every community has hundreds of churches. Every quarter mile there are at least 3 churches and at least one of those is an enormous, 1200-seat facility on acres and acres of land in a beautiful setting. Everybody cleans up and attends church.

It strikes me that we have not heard the F Bomb once, not one time! People don’t curse here. We never hear the Lord’s name in vain. Never.  Everyone is polite (even in the Mall). It is “Please” and “Thank You”, “Yes Sir” and “Yes Ma’m”. Refreshing. They are educated to be courteous and gracious.

These people love camping. Not the kind of camping we do in Idaho. There are huge state and local impoundments  with acres of campsites around the water’s edge. It is very communal.

Driving through the Barkley Lake facility last night we saw that every site was full. It is Fall Break here. School starts August 1st and October 1st the schools close for 2 weeks and everyone heads to the campgrounds. Each family has their camper or RV with all the appropriate toys: boat, wave runner, and the omnipresent golf cart. Golf carts are everywhere, it is more fun and easier to get around in these carts and everybody owns or rents one. Some are souped up and fancy. The campsites are close and familiar. It is very social. There are parades and BBQ’s and dances in the local villages.

Campers are into lighting. Most add outdoor decor to create a feeling of warmth, fun, and style. There is competition to decorate campsites with cute harvest signs and figures and lights.  In addition to the overhead multi-color string lights we noticed large white buckets with solar lights inside hanging from the trees to illuminate each vicinity as well as colored rope lighting to outline the perimeter of individual sites.

Oh, my goodness. Everything is deep-fried from pickles to Oreos. If it can be eaten, it can be deep fried. Many counties are alcohol free or “dry”, but these folks prefer their soda to beer anyway. We’ve never seen a drunkard or a drunken party. Perhaps they behave themselves until they get to Nashville (their Vegas). The favorite restaurants provide 2-inch pork chops slathered in gravy, flower pot bread and Strawberry Butter. The baked potatoes are gigantic and LOADED.  Be careful to ask for your salad dressing on the side or it will be swimming in Ranch. Pork is king, bacon adorns every side-dish. Deep-fried Catfish,  Mac & Cheese are always available. All pies have mountains of meringue.

3 a.m. Joan heard a noise that was not one of common sounds heard at night. Inky didn’t alert us because he’s become accustomed to all the strange noises here. We are moored in a covered slip with 40 other boats and many spooky sounds: the structure creeks and snaps; the herons and egrets squawk and flap and scritch across the metal roof like aliens; the Asian Carp suck on algae laden hulls creating loud pings and pops; the breeze sends ropes and chains clattering across posts and lines. But this was a human sound that awakened us.

We peered out and saw 3 men dressed in black carrying pen lights rummaging through boats. Leaving Joan quaking in the boat, Don called 911 and skulked around in the dark to keep track of the bandits while he guided the county sheriff to our site. It took 50 minutes for the law to arrive and by that time the thieves had entered and ransacked 2 other piers. But, they were caught red-handed thanks to the fearless and intrepid Don!

Boated to Buzzard Rock Marina. Not too appealing by car, but Beeeeeutiful by boat! With a nice restaurant. Smaller, but friendly and tidy.

Check out the size of those coconuts!!!!

Barge, loaded with coal,  waiting for the lock to open.  I’m standing on the bridge looking down and the tow is underneath me.

Loopers arriving for weeks. Dozens of them. Big BBQ tonight. 10/6/16

Drove to Mammoth Cave Monday, spent the night in their Woodland Cottages and toured the Domes and Dripstones section of the numerous tours available. Mammoth Cave is the longest known cave system in the world with more than 400 miles surveyed to date. The park is approximately 52,830 acres. Since Don had been to Merrimack Cave numerous times and he knows how much I love rocks, he was determined to introduce me to caves. Well…it was not what either of us expected. We and 60 others idiots wound down through deep pits and high domes via a 280 step staircase, winding and snaking through very narrow walls. It was NOT Merrimack!!! We both experienced the heebie jeebies. I forced myself to look at my feet rather than look up or down and realize the extreme vertical drop we were taking along a 2-foot wide twisting staircase…it really was frightening, dim and spooky. The vertical shoot gave way to large canyons and underground hill-climbs enhanced by vast overhead slab ceilings of flat rock. I just knew it would drop and crush us at any moment…more hyperventilating! At the conclusion of our trek was a fairyland formation of dripstones. That was pretty. Our tour was 2 hours and 500 steps! 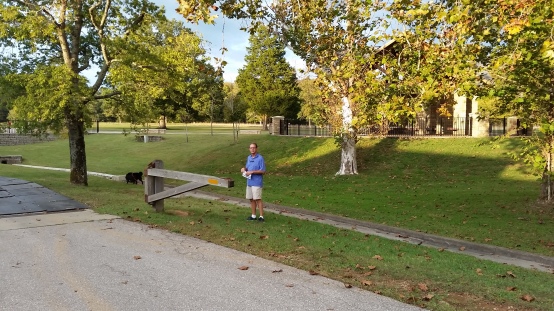 Our cottage was built in the 1930’s. Very clean and very quaint. 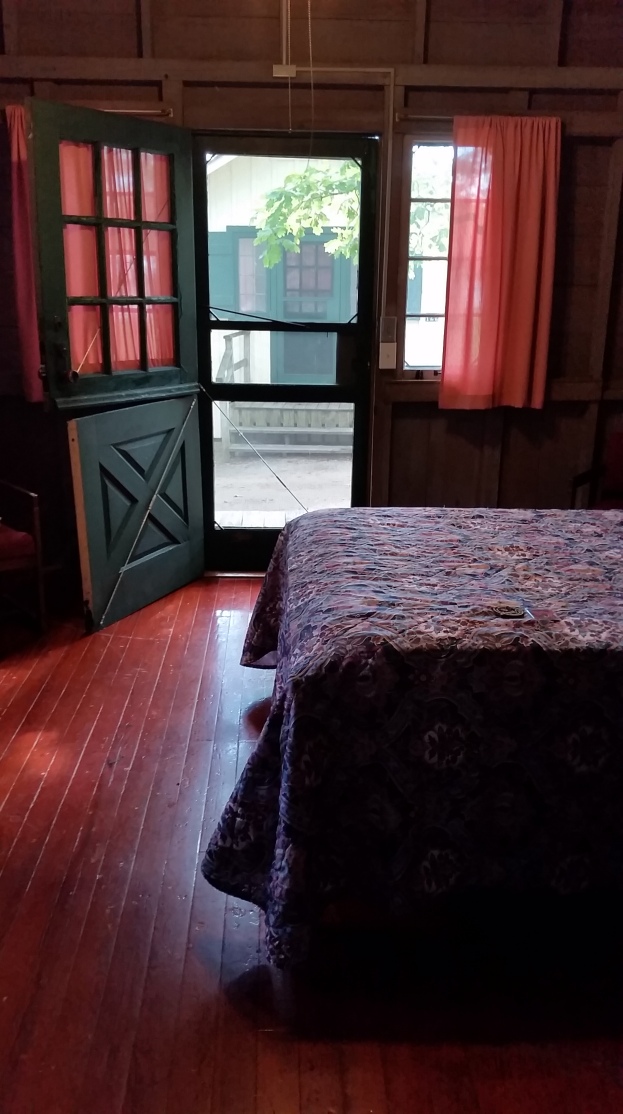 While driving back to GTB we pulled into the Southern Shaker Village. Hadn’t planned this stop, but it seemed interesting and it was.  Founded in 1807 by Shaker missionaries hoping for large numbers of willing converts in “the west”. By the 1830s they had constructed 75 buildings to house the community and provide work space for their industries. Many of the original buildings were torn down or destroyed.  The existing buildings are immaculate and spacious.

They tried to live as Jesus lived: simply and frugally. They were celibate. They took in orphans.  They were industrious and believed that hard work was Godly.  Since there were few children to carry on their lifestyle and few converts, they couldn’t sustain what they’d created and the community disbanded in 1922. 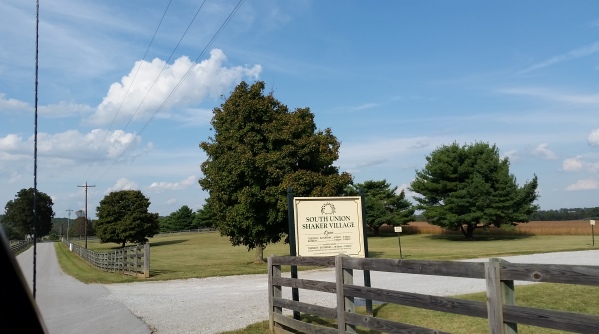 The Docent grew up in Mtn. Home, Idaho, 30 miles from my hometown. Go figure. That relieved my homesickness. Thank you Cheryl Williams.

Further along Interstate 24 we came upon an unusual sight: an enormous tower piercing the skyline. We pulled in to visit the Jefferson Davis Monument. In 1917 construction began on this 351-foot obelisk resting on a foundation of solid limestone and containing walls seven feet thick the the base. This site is a memorial to the famous Kentuckian born here in 1808. He was the only President of the Confederacy. 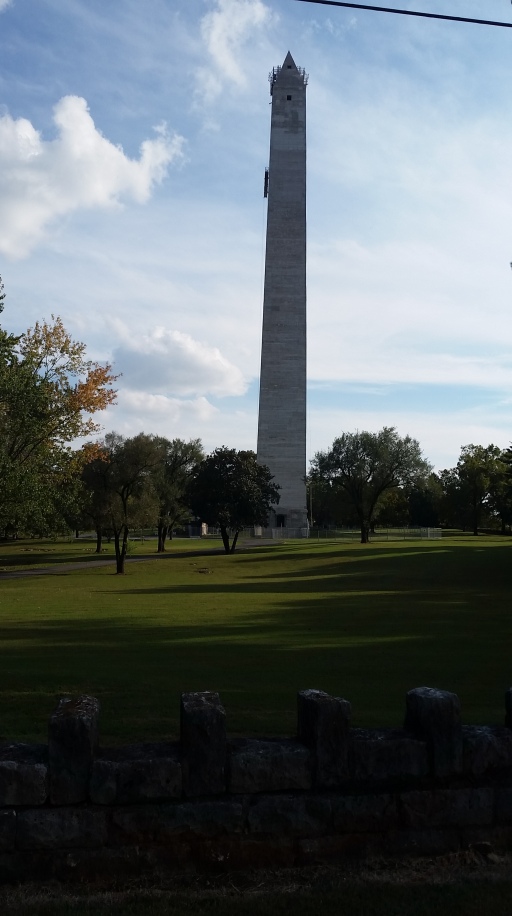 Visited the Marina at Kuttawa, KY for lunch. HU-B’s Restaurant is perched above the water with captivating views of the harbor and lake. It it a large facility with numerous multi-level decks for casual dining. The staff was wonderful. 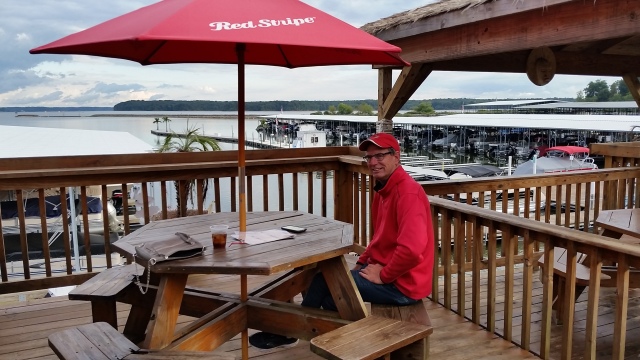 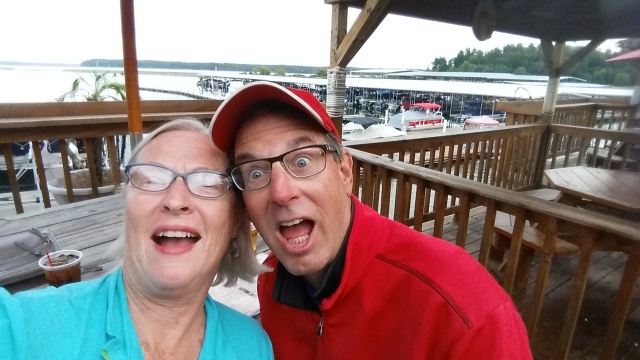 Eddyville and the Lyon County Museum. Beautiful old southern home Rose Hill overlooks Lake Barkley and depicts the history of Lyon County and features a working replica of a typical iron furnace with exhibits of iron mining and processing of the mid- 1800s. Inside were hundreds of pictures of the old town before the great flood took most the town down river and left Rose Hill and the Penitentiary on rim view properties.

The Kentucky State Penitentiary, also known as the “castle on the Cumberland,” is a maximum security and supermax prison with capacity for 856 prisoners located in Eddyville, Kentucky on Lake Barkley. This enormous facility rests beside the Rose Hill Museum. 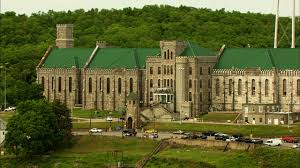 September 25…Back to Paducah.

We spend a lot of time here. Bigger town with lots of options. This time we visited Whitehaven, a restored 1860s Southern mansion featuring period furnishings and memorabilia of Paducah native Alben Barkley, who served as Vice President under Harry Truman. Whitehaven is one of the finest Classical Revival residential structures in Kentucky. Gorgeous.

Annual Barbeque on the River. 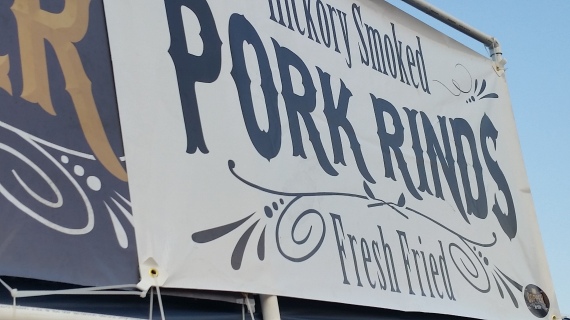 Paducah Wall, Portraits of the Past. I love this feature. Hand painted panels depict the beginning of time to the present on 50 life-sized murals. I can’t get enough of this wall. 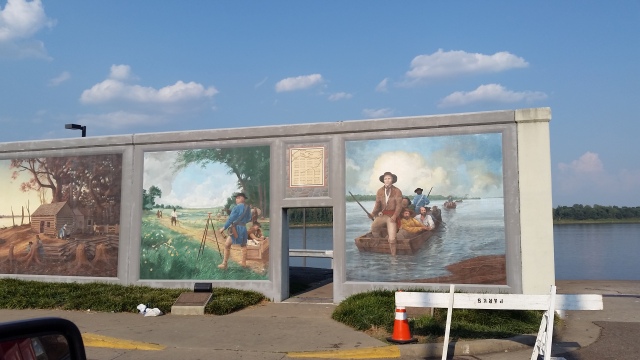 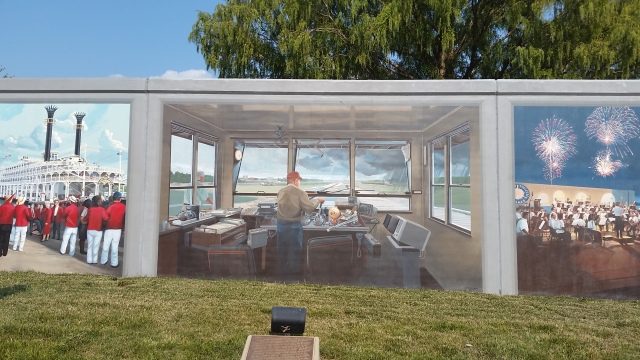 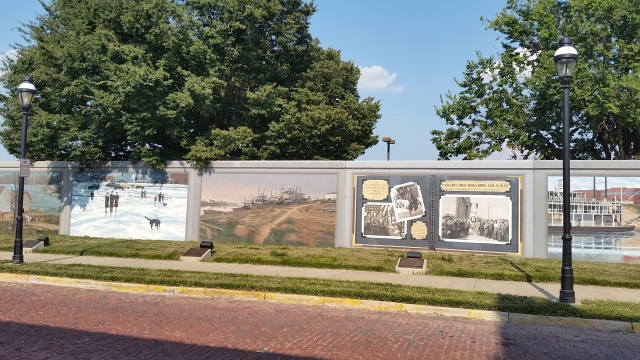 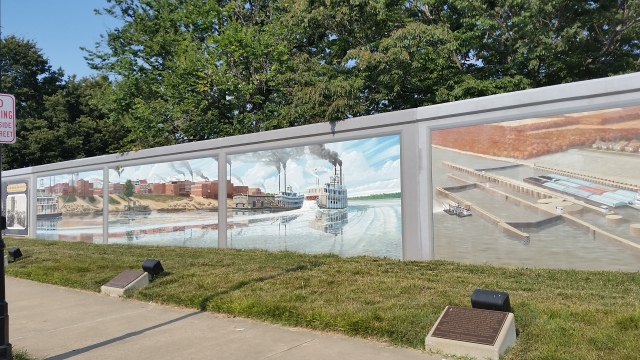 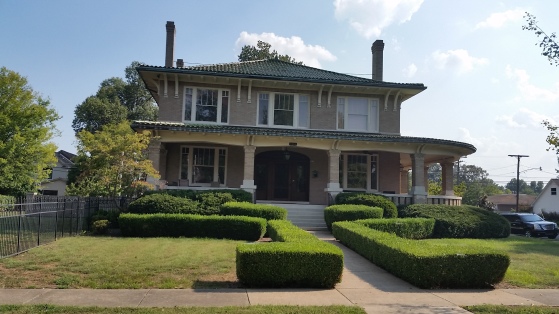 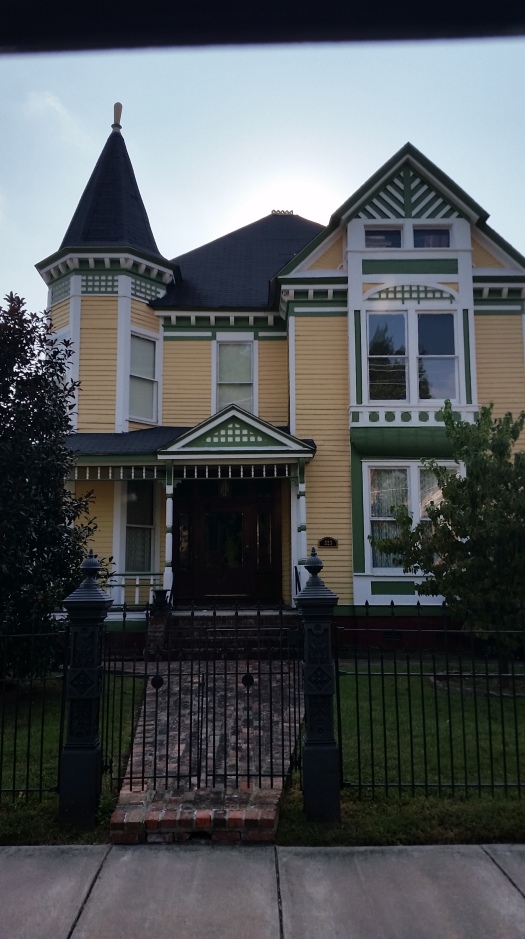 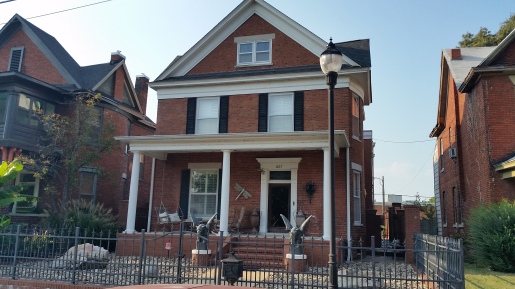 River Discovery Center celebrates Paducah’s maritime legacy and lore with interactive, water-filled exhibits, including a working model of a lock and dam.